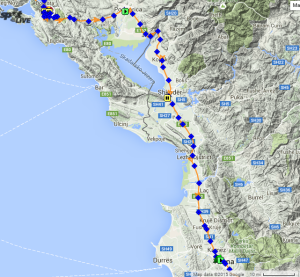 At 5am, the other guys wake and start leaving.  I lie there for an hour, then do the same

My cheese and ham rolls I lovingly made last night are horrible, so I chuck them.  Instead I eat a banana and a Mars bar and then start and climb the rest of the mountain (500m or so, so 1500m from level all in). I then descend and find a bakery in the lovely named Pod Gorrica, (more cheese filo pastries) then a town with a garage at the exit… It’s got a pair of Italian riders in it (the space blanket owners) and a Dutch guy I talked to in vukovar (#162 rudy rollenberg)… He was also bivvying last night so I guess he was the  snorer

We drank coffee and coke, they were heading via Bulgaria so I trucked off up the road.

I got passed by a couple of guys I originally met before the start. I’ve seen them repeatedly since in France and rode with them a bit on the start of the Strada del Assietta. – Simon Romaine #33 and #91 Jon Kelley. They too were heading for Greece via Albania.. We rode together for a bit, found a hotel for coffee (plus wifi), looked at distances and chose Elbassan as a destination, 270k for the day, about 200k to go.  We continue on, swapping the lead.  Over the border into Albania and some great descending down to the plain  Fuck it’s hot.. 40 degrees.
Lots of water, ice cream stops etc.
Nice tail wind so the ks drop… I ride with the guys a bit, then we split, reform etc.
Lunchtime at Shkoder. My God, the first Albanian city I experience.
I ride straight through the middle. Albanians love their stolen cars and drive them like idiots, worse than Bosnia or Montenegro.  the locals on bikes love riding the wrong way up the roads, but then so do the cars
I find a cashpoint, attached to a hotel, and play cashpoint roulette. 1 chicken dinner later from the most expensive restaurant in Shkoder, I am back on my way

The closer to Tirana I get, the worse the road gets.
The hard shoulder vanishes, and it’s back like riding in Bosnia. Keep to the white line. 6 inches right, and it’s a gravel trap. Cars are shifting it past 4 ft to the left. There is no dominating the lane here.. They will just push past, so it’s ride positively but in a defensive way. 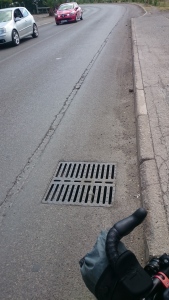 The road become a motor way – scary, but it’s so much safer. I have a whole full size hard shoulder to myself, and the idiots no longer overtaking each other constantly. Not sure I should be there, (I got an 2 hour penalty in the results) but after 10k, it ends but the road surface takes a turn for the worse

The nice garages are a distant memory

I pull of off for 10 mins to chill, eat a big of crisps, and pluck up the courage to continue…

It’s fine. My hands are killing me, my arse is in taters, but I make good time

It’s just starting to get to dusk. I hit Tirana, 10k to the centre, 48k out to Elbassan via a tunnel or hill climb. Shit. 10PM before I get there.  My brain is not in a good place.

I give up chasing my hotel booking.

I check into the 2nd hotel I find for 30 euros, with aircon. I am 3k short of the city center but safe and sound, and I have Internet.

I eat a lovely chicken dinner at a cafe up the road, pointing at the pictures for what I want. The football is on, just like any restaurant/cafe anywhere in Europe.  I plan how I get out of Albania alive

there may be trouble ahead